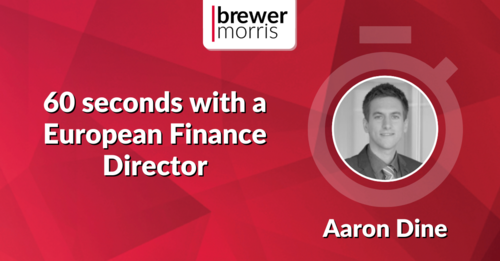 Aaron Dine is currently the European Finance Director and Group Head of Tax and Insurance for Elementis, a constituent of the FTSE 250. Having qualified through Ernst & Young and working his way up to Tax Senior Manager, he moved in-house in 2018. Here we ask Aaron about his career decisions to date, and how he positioned himself for a role beyond tax

Aaron, what drew you to a career in tax and the Big 4?

Like most people, I fell in to tax. I decided that I wanted to move in to the world of finance, and a three year training contract in the Big 4 was offered. We agreed I would join the tax team in EY’s Southampton office, and in hindsight, this gave me a great grounding.

What made you decide to make the move in to industry?

I progressed to Senior Manager quite smoothly and my Big 4 career was progressing well. Then, unexpectedly, I was turned down for Director. When I discussed the things I needed to do to get that role, I realised that a lot of the focus was around Business Development and that didn’t really excite me. As a result, I started talking to my network (including you) about what life in-house might look like, and made the move.

My most valuable skillset has definitely been the ability to distil complex tax issues; explaining difficult concepts to non-tax people. In-house, I speak with people at manufacturing plants, in procurement, in sales, and they don’t want a four page answer to a tax question. Some of my Big 4 peers where guilty of overly detailed technical analysis, but working in EY’s regional office with a lot of OMB clients really forced me to kick that habit!

I wouldn’t necessarily change anything. There seem to be two natural points to leave the Big 4; as a newly qualified or as a Senior Manager. I felt that moving at Senior Manager level was a good choice, and opened a lot of doors at quite a senior level.

I think you have to be more proactive and assertive in industry. You can carve out more of your own role, and get involved in things outside core competencies by being a problem solver for those outside the world of tax and finance that I operate in. Put your hand up, speak to the right people, be a problem solver because the structured career path of promotions and pay reviews of the Big 4 doesn’t exist to the same extent in-house.

Was the European Finance Director role secured by osmosis of more and more responsibility, or something you were formally exploring with the executive leadership team?

A bit of both. Some things have naturally fallen to me over time, but I had also been having proactive discussions with the CFO which meant he knew I was keen to progress. He has been really good at getting me involved in other areas of the business, and has been really influential in my development. Good contacts within the business are essential and meant that there was support internally when my promotions were discussed.

Finally, there’s been an element of luck as well; people have moved at the right time, certain projects have come up, but I had positioned myself to capitalise on that good fortune.

Make sure you are communicating with the right people, and get their help. That’s important within the organisation you work for, but equally important is the group of friends, peers and advisors you have built outside your employer’s four walls.