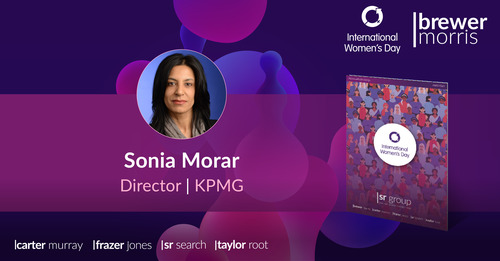 What skills and attributes do female leaders bring to create diverse leadership at management level?

I strongly feel that diversity is not necessarily about gender or race, it’s about diversity of personality and with that comes diversity of thought, experiences and vision. In my experience, the most successful and interesting management teams have a broad range of diversity across genders, race, age and socio-economic backgrounds. Given that we currently have a smaller proportion of female leaders than male, appointing more of them will naturally inject broader ways of working and insights at management levels which will in turn benefit any organisation.

What does “choose to challenge” mean to you?

‘Choose to challenge’ to me means having an equal authority to manage your own decisions, without any concerns about ramifications or being judged. It’s about having options and choices and having the courage and confidence to take them up. To me it means sincerity and conviction - being able to freely speak what you really feel without worrying about the consequences of sharing your opinions and concerns.

How can female leaders ensure they get a seat at the table?

Female leaders need to almost forget that they are female! My view has always been that the best talent should have a seat at the table and focusing on their gender or diversity will only hold individuals back. In my 25 years at KPMG I have witnessed some incredibly talented women rise to the top table – in fact I have been fortunate to have worked with more female leaders in that period than male and each one of them has helped shape my career. The qualities I saw in them was being aware of their abilities and not suffering from imposter syndrome. I also witnessed a relentless focus on their end goals which were achieved with invaluable support and guidance from the female role models around them.

I think the impact of Kamala Harris’ appointment is more significant for diversity than gender.  We have been fortunate in the UK to have witnessed the appointment of two female Prime Ministers.  However, the ‘Kamala effect’ impacts a number of diverse groups – women, Black Heritage, Asian Heritage, non-mothers, step-mums, those in mixed race marriages. It is giving us all hope and courage. Her appointment has given every woman in these diverse brackets the license to be proud of her heritage and identity. But I don’t think we can attribute this impact just to Kamala Harris’ appointment. We saw a similar impact after the US appointed their first Black President. Likewise, when we appointed our current Mayor of London and previous/current Chancellors. And more recently, KPMG’s appointment of our first female leaders in 150 years, one of which is from an ethnic minority background.  In my view the bigger impact of Kamala Harris’ appointment will be to the next generation of ‘multi-diverse’ leaders, which will be the norm. I am hopeful and confident that the gender disparity between leaders will disappear in my generation.

Women don’t talk about themselves enough! And by this, I mean their journey, their struggles and challenges, their barriers, their ambitions and most of all their achievements. When they do talk about themselves, they tend to adopt a ‘chin-up’ mentality and focus on the positives, maybe in fear of being perceived as not good enough if they share anything not so positive. Women also don’t talk about reward enough. We tend to be almost embarrassed to raise it, as if we should be grateful to be in the positions we have worked so hard to be in. I would like to see more openness in women promoting themselves and putting a value on the immense contributions they make.

Click below to read the full edition of IWD2021 #ChooseToChallenge: Female Leaders Across The Globe.